We hear how our nation is so divided, and that we should be more compassionate and accepting of others.

How can we do this if we don't have compassion and acceptance of ourselves?

Many of us think we do love ourselves until we make a mistake, or something devastating happens like losing a love, a job, or an illness occurs; then we beat ourselves up.

Those are simply opportunities to connect and support your authentic self, the part of you that was left behind as you try to please others.

Some people feel self-appreciation, and self-love is selfish.

It took me years and many tears to learn that lesson. I gave so much to others that I was stressed, and my body was constantly in pain from arthritis.

When I learned that arthritis is an immune disorder, and my body was attacking itself, I woke up. Something is wrong here. Why am I not just beating myself up, but viciously attacking me?

Normally, your immune system acts like a bodyguard, fighting cancer cells and getting rid of them, as well as protecting you from viruses or bacteria like the cold or flu. However, your system can mistake your cells and tissues as the bad guys, and attack them as well.

Doctors and scientists don’t fully understand why according to the Arthritis foundation, 53 million adults and 300,000 children have some form of arthritis, or how to prevent it from occurring. They do teach practices to reduce symptoms, including diet and weight loss.

For myself, I had to look at the disorder from a spiritual perspective. What was it doing to my mind and body? What was this, like any other illness telling me about myself?

If my own body was attacking itself, then I needed to see what I could do opposite.

One of my teachers, World Renown Zen Master Thich Nhat Hanh says, “Anger is like burning down your house to get rid of the rats.”

I certainly had anger for having the disorder. However,

anger tightens up our muscles, body so oxygen can’t flow properly. It’s the oxygen, the Chi, the Universal life force that heals.

I also had to stop fearing and worrying about why I had the disorder. And to stop being angry that all the recommended things I was doing, was not eliminating the excruciating pain, let alone healing.

What was important was to learn the lesson. What was it teaching me about myself? The answer? A lot.

When I began to look at my thoughts and emotions, and what I was really angry about other than the disorder, it was the first steps in loving myself, especially my body.

Practicing Mindfulness, being aware of my thoughts, I saw that I was angry with my body for having the disorder.

I had to start loving and accepting myself just the way I was. As strange as it may be, I had to love the arthritis.

Some may think I will never love or accept an illness. “I must keep fighting it.” Loving and accepting is not rolling over and surrendering, it’s simply letting go of the suppressing emotions, and when you do, you have more energy to find treatments and healing.

“There is pain and then there is the secondary pain, which are the emotions about your illness.” Secondary pain is described as suffering from toxic thoughts and emotions about the initial pain.” I am paraphrasing authors Vidyamala Burch and Danny Penman from their book, “You Are Not Your Pain.” They write about how secondary pain can block your healing, and how Mindfulness is the key to releasing those damaging emotions and thoughts.

Mindfulness is being taught in medical clinics and hospitals around the country. Some doctors say it’s more effective than morphine.

I have been on the spiritual path since high school 100 years ago. Since then, I have heard various self-help gurus, and spiritual leaders say, “Love Yourself”

Easy to say, but hard to Commit?

When I found and practiced mindfulness, the inner peace and the love for myself and my body came like the morning sun.

I was awakened. My body and my mind began to heal.

How does Mindfulness help you to tap into self-compassion and love? Through self-awareness.

When you practice Mindfulness, you become aware of those abusive, self-deprecating thoughts that fly under your radar and quietly attack your mind and your body, stressing you out.

You learn that those negative emotions like anger, resentment, and lack are simply your internal GPS system telling you "That's not how God sees you or the situation.”

Mindfulness brings awareness, and signals you to start thinking the opposite.

The great thing is you don't have to fix those thoughts or emotions. Simply being aware of them often-times “acts" like the light dissolving darkness. You discover your ego-mind kept you frightened, but now you see; nothing was there.

Your light of self-awareness brings self-acceptance and self-love. Stress begins to melt away because you see how much pressure you put yourself under.

You realize it's not others who have held you back in life. It was those thoughts that played in a loop, many from your childhood.

Do I still have arthritis? Yes. However, I don’t suffer any more or have close to the symptoms I had before. Now if I have occasional flare ups, I use them as my Mindfulness GPS system. I check in with my thoughts and emotions; stop, breathe and relax; and remember to exercise regularly and watch my diet.

Mindfulness is a practice. It’s easy to learn but so easy that you forget to use it. That’s why I wrote “Mindfulness Meditations Journal With Easy Exercises to live in the Moment.”

My prayers are that it will help you use self-compassion, self-acceptance and release stress.

Check back soon
Once posts are published, you’ll see them here. 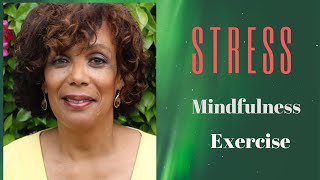 Use Mindful Breathing for Stress Relief

How to Overcome Parenting Stress

You Are Whole, Perfect and Complete